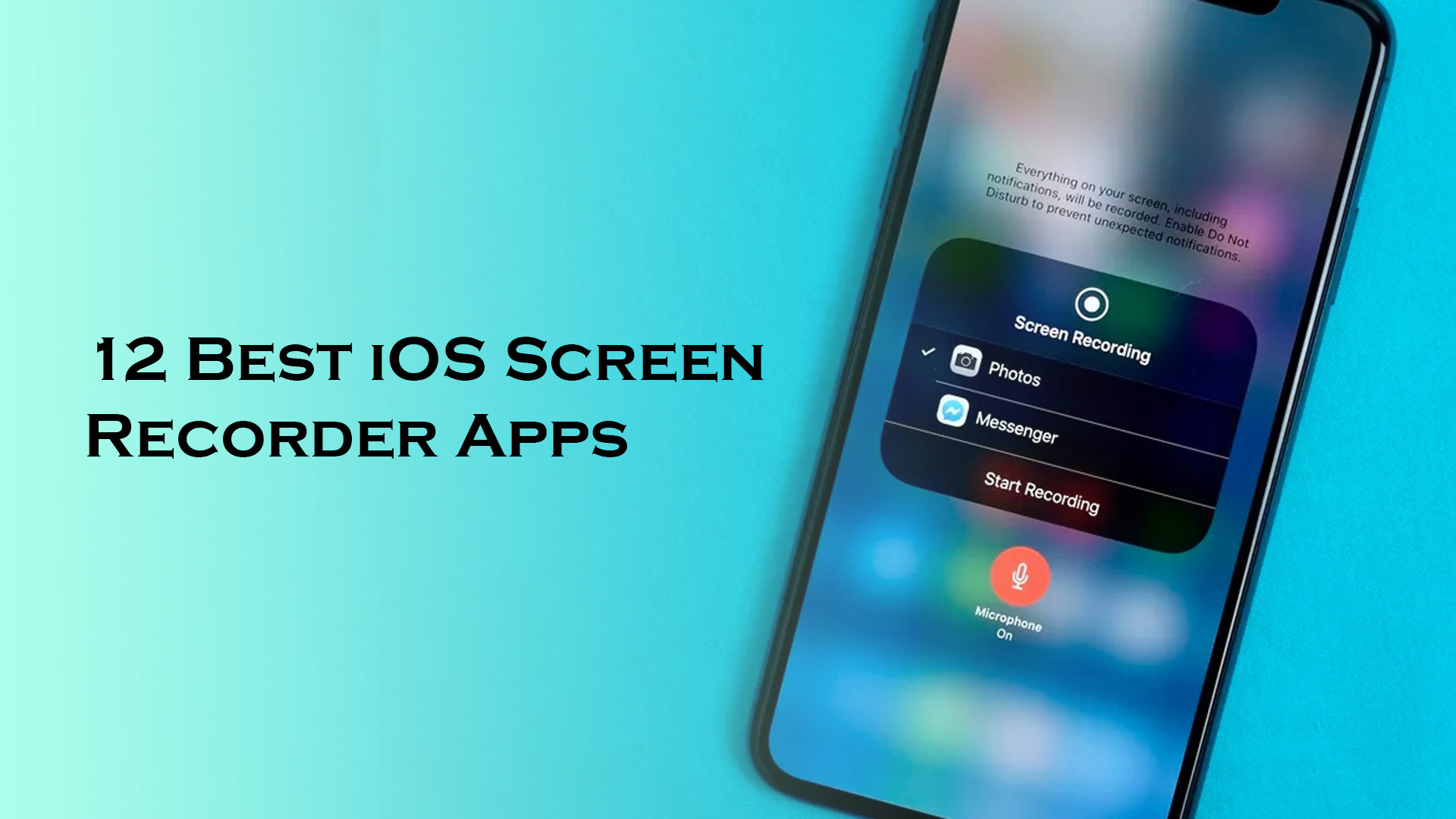 With the aid of built-in native capabilities, Apple has made it quite simple to capture your iPad/iPhone screen. However, you will discover that there isn’t much you can do, particularly if you go beyond the basic capabilities. Fortunately, there are a slew of third-party iOS applications available to help you bridge the gap.

These best screen recorder applications can help you get started on a new and better road to capturing lessons, app demos, gaming footage, walkthroughs, and video chats, all from the palm of your hand. This means you may be on the go while still capturing all you need to communicate.

The finest iOS screen recorder apps provide a dependable and high-quality screen video capturing experience that makes it virtually simple to communicate successfully. Your screencasts will have that extra touch of distinctiveness and demand the viewer’s full attention as a result of this.

Apple has included a screen recording function in iOS since version 11. A screen recorder has been much more accessible with the new iOS 14 release. But do they truly provide you the capacity to screen record everything that happens on your screen while keeping things simple? If screen recording is essential to you, check out the list below for the top screen recording applications for iPhone in 2021. Are you creating app demos, streaming gameplay, or doing tutorial videos?

We have made this article on 12 Best iOS Screen Recorder Apps to Record your iPhone and iPad based on the authentic user reviews and the opinions of the industry experts.

Below are the 12 Best iOS Screen Recorder Apps to Record your iPhone and iPad:

Popular social media services like Twitch and YouTube make it easy to post screen recordings. Game streamers will love the new FaceCam feature, which allows them to add response and commentary to their recordings. However, the enjoyable process of converting video to GIFs makes it our top pick on our list of the best screen recording apps for iPhone.

Features of the Screen Recorder app for iPhone:

Screen Recorder +: Do more with your recordings

The Screen Recorder Plus App ranked 2nd in our 12 Best iOS Screen Recorder Apps to Record your iPhone and iPad article. Screen Recorder Plus will take your screen recording to the next level. It’s one of the few programs that support 2K and 4K video resolutions for a cleaner, crisper image. It also has a complete timeline editor, so you may cut or crop your video after you’ve finished recording, shoot a response, or even record the narration.

When you’re through capturing the video, you can start uploading it to YouTube right from the program, so you can do everything from start to finish using Screen Recorder Plus.

Look no farther than Screen Recorder – RecPro if you’re searching for an app that can both live broadcast and record your screen. You gain complete control over your screen recordings in addition to being able to stream to multiple platforms such as Twitch and Facebook.

Before recording, you may choose the resolution and framerate, and when editing, you can apply filters, change the speed, and even record a video commentary. Give this app a shot if you’re looking for an app that will record and broadcast your iPhone screen.

The Reaction Cam App ranked 4th in our 12 Best iOS Screen Recorder Apps to Record your iPhone and iPad article. Reaction Cam differs from the other screen recording applications on our list in that it focuses on recording you rather than your screen. If you’re doing a response video, this is ideal. It captures your screen while playing back various movies from throughout the internet, and it films you as you respond to seeing them, as the name implies.

It’s similar to the app Web Recorder in that it not only captures videos from YouTube and Instagram, but it also allows you to record other webpages and films your response as you go to them. This might come in handy if you’re making videos in response to news or announcements in video games or films.

While AirScr can record your screen and audio, its editing capabilities are where it really excels. You may edit your footage, mix it with other recordings, add a response using the facecam, and even record voice-overs for your films after you’ve done it. This program provides you a lot of flexibility over your recordings that you wouldn’t get from other applications without downloading a video editor.

Screen Recorder – Livestream: One of the best screen recorders for iPhone

The Screen Recorder – Livestream app ranked 6th in our 2 Best iOS Screen Recorder Apps to Record your iPhone and iPad article. Screen Recorder – Livestream might be the all-in-one app. It features a sophisticated video editor that allows you to cut, crop, or combine your recordings, and it can record or broadcast your screen to multiple platforms. If you wish to use a custom watermark on your films, you may do so. It also features a whiteboard function for annotating or displaying your drawing and painting abilities.

Web Recorder could be the software you’re looking for if you want to record stuff in your browser. It works as its own web browser, recording just what happens on the online page. So you don’t have to be concerned about notifications coming up or cropping it afterwards to remove elements such as the time or your data connection.

You may save and share the video immediately from the app when you’ve completed filming.

Record It! not only allows you to record your screen and audio at the same time, like the standard iOS screen recorder, but it also allows you to record using your front camera to catch your responses to the screen. This is useful if you’re making videos for YouTube or other social media sites like Instagram since it allows your viewers to see both your face and your screen at the same time as you’re talking.

You may even import past recordings from your Camera Roll and customize them with video reactions, audio narrations, and other notes.

You may be familiar with TechSmith’s Camtasia suite of applications if you perform any screen recording on your computer. Not only can you record your screen using TechSmith Capture, but it also records your microphone, allowing you to add narration or voice-overs to your movies.

After you’ve completed your recordings, you can review, delete, and share them in the app’s well-organized library. If you have Camtasia installed on your computer, you can transfer movies instantly from your mobile to your computer without ever leaving the program.

You can record your screen like a pro with Screen Recorder Pro, but you can also capture audio, edit movies, and record yourself chatting to the camera. However, one of Screen Recorder Pro’s best features is its annotation capabilities. You may not only drop stickers to assist bring attention to a specific region of the screen, but you can also create using the brush tool, much like you would in Instagram or Snapchat.

You might not notice anything unusual about DU Recorder if you simply use it to record the screen of your iPhone. What makes the software so strong is all of the other things it can do. It includes a set of editing tools and video filters, as well as the ability to live-stream your iPhone’s screen to YouTube, Facebook, and Twitch. It’s free to download, but it’ll put a watermark on every video you make. With an in-app purchase, you may remove the watermark completely.

This Apple software primarily serves to live stream video from your iPhone or iPad without much fuss, as the name implies. It nevertheless manages to provide a solid screen/game recording capability, as well as some minor video editing tools to assist you improve the final video before sharing it. This mobile app allows you to keep the output locally on your phone while you are not sharing films live, after which you can select whether to playback or share the video.

You may incorporate audio from the device itself or utilize the microphone to add narration or voiceover related to the primary video to prevent live streaming uninteresting videos. Apart from assisting you with live streaming, the app also offers a selection of live streams that you can view directly from the app without the need for additional players.