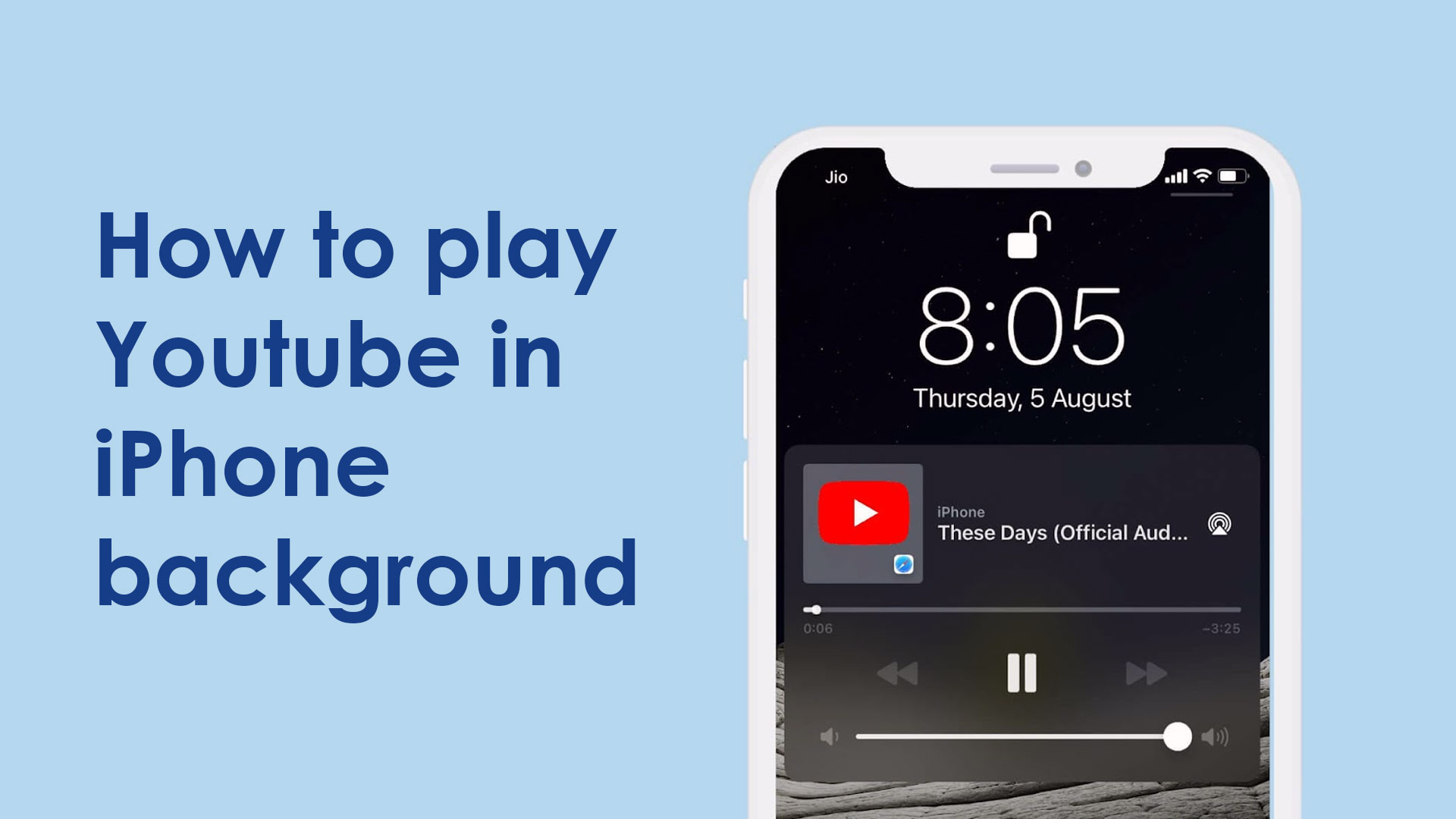 When watching YouTube videos on your iPhone, one of the most common annoyances is that the app goes off when it is not in the foreground. The movie will stop playing if you respond to a text or open another app on your iPhone.

When the video cannot continue to play while the YouTube app is running in the background, it would be wonderful if at least the music remained to play rather than everything freezing.

There was a time when you could listen to YouTube material in the background. This entailed opening your preferred mobile browser and, after watching the video for a short time, closing the browser.

If done successfully, you’ll be able to access the control center and press the play button, which will begin playing the material you’ve loaded into your mobile browser.

However, this no longer works in recent iOS versions, leaving tens of thousands of iPhone users without the ability to play YouTube in the background.

Fortunately, some iPhone users have identified a few more options. While these strategies take a little longer to implement, they are effective.

Now, keep in mind that Apple and YouTube are actively working to eliminate these ways, so some of the methods described in this post may no longer function by the time you finish reading it.

Because YouTube has a Premium subscription that includes this feature, it’s no surprise that Apple and YouTube are working hard to eliminate the workarounds.

We know that purchasing and subscribing to YouTube Premium allows you to have YouTube play in the background, but it costs money ($11.99/month as of December 2020).

If you don’t mind paying for YouTube Premium, though, this is probably the simplest and best option to play YouTube in the background on your smartphone.

It’s vital to realize that YouTube Premium and YouTube TV are not the same thing. YouTube TV is a distinct service that lets you view cable and satellite television through YouTube, making it an excellent cord-cutting option for individuals who want to keep watching their favorite shows. You can also watch live broadcasts on YouTube TV, which is very useful for sports aficionados.

Despite the fact that YouTube TV has a lot of cool features, it does not allow viewers to watch their shows in the background on their mobile devices. You’ll pay a lot more for YouTube TV than for YouTube Premium, and you won’t be able to view your episodes with your phone screen turned off.

But, without further ado, let’s have a look at the many methods for playing YouTube material in the background on your iPhone.

Requesting the desktop version of YouTube on the iPhone, rather than utilizing the usual mobile browser site, appears to work for some individuals. Depending on whatever browser you’re using, the processes are vary.

To bring up a tiny menu of choices in Safari, simply tap the aA symbol to the left of the address bar. Select Request Desktop Website from the list of alternatives. Simply press the three vertical dots in Chrome and choose Request Desktop Site from the drop-down menu.

Some people claim that this no longer works with Safari, while others claim that it does. On an iPhone 11 running iOS 14.2, we were able to get this to function. We had to utilize the Request Desktop Website to get it to function (the mobile version of the website would not work). With Safari open and the movie playing, we then locked the phone screen. This stopped the movie from playing, however the video resumed after tapping the play button on the lock screen/control center while the phone was locked.

If it doesn’t work, try using a different browser or continue on to the next step.

It has been confirmed that this will function with Chrome as of December 2020, however you must let the music play for a minute or two before locking the screen. When you’re finished, the music will fall silent; simply press the play button on your device’s lock screen to resume playing.

Use private browsing to play Youtube in background iPhone

This solution necessitates the use of Safari’s Private mode. Simply go to YouTube using the Safari browser. Open the video you wish to play in the background after you’ve arrived. Then you must change the session to a private one by touching on the rightmost icon along the bottom bar and then selecting Private.

This will take you to a private session where you can see the video. After that, you may quit the browser and use the control center to continue listening to the audio material.

Some individuals report that this no longer works, while others claim that it does. On an iPhone 11 running iOS 14.2, we were unable to effectively activate it. It did, however, operate once we requested the desktop site as described above.

If nothing else works, you may always try downloading a third-party app to let your iPhone play YouTube in the background. These programs can help you get around YouTube’s attempts to prevent you from playing background content.

A handful of these may be found in the App Store; simply pick one and follow the instructions within the app. Youtube Music App, which is accessible on Apple’s App Store, is one of the most popular apps.

These programs are occasionally pulled down and may even cease operating, but a new one will usually appear. Also, be sure to conduct some research on the various applications and select the one with the best online user reputation.

How to keep YouTube music playing in the background on iPhone

Most music apps on the iPhone allow you to play music in the background. After all, if they couldn’t, they’d be practically useless. That isn’t the case with video applications, which makes sense because you can’t watch movies with your iPhone locked and in standby mode.

YouTube is a two-in-one program that provides videos and, with that, music videos, which are an incredibly popular method to consume music these days. There are also podcast episodes and concerts available.

Now, YouTube does allow users to play music in the background using its video app, but there is a catch: you must be a Premium subscriber to access this function. You may, of course, utilize the YouTube Music app, but you must be a member to do so.

Fortunately, there is a workaround that allows you to play music from YouTube videos in the background for free, and it’s not difficult to implement. Watch the brief video below or read the written instructions below.

How to play YouTube music in the background on iPhone

The key is to utilize Safari, your phone’s default browser:

When you return to your home screen or lock your phone, the music will cease playing because the video has finished playing. You can, however, simply get it to play again without having to return to the browser.

When you drop down Control Centre after that, you should see the option to play the music again. You can lock your phone and play and pause it from the lockscreen interface, or you may go about your business on the phone using other applications.

To listen to it when your phone is locked, simply lock it and look for a music widget control on the lock screen. When you press play on it, the music will continue to play in the background.

It’s worth mentioning that if you’re in a playlist or queue, it doesn’t appear to proceed to the next song automatically, so you’ll have to re-open Safari to pick a new song after one expires. Long compilations and live performances abound on YouTube, and you may easily discover ‘videos’ lasting more than an hour.

Hi, I am Julia Nahian. I am a freelance technical content writer. I completed my bachelor's in Computer science from Georgetown University. I worked for Forbes, Business Insider, and Business of apps. I love to write about technical things. I like to review iOS apps and share my knowledge to solve iPhone and iPad-related issues.